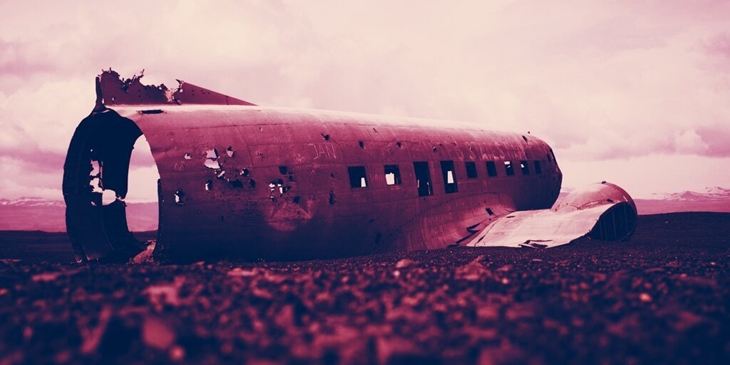 After an initially promising week, Bitcoin tanked on Friday night.

Just after midnight EST, the price of the world’s biggest cryptocurrency fell to $45,033, a staggering drop of 34.5% from an all-time high of $68,790 recorded on November 10 this year. It has bounced back a little, and currently trades at $47,311, but that’s still a concerning 17.51% lower than it was 24 hours ago, according to price index CoinMarketCap.

Bitcoin started last month on a bull run, but news of the new COVID-19 variant Omicron pulled the price down. On Monday, Bitcoin and the wider crypto market looked poised to recover. But five days later, tumbling crypto prices offered another Black Friday for HODLers.

Ethereum’s losses were not quite as severe as Bitcoin. The world’s second cryptocurrency is down 9% over the past 24 hours to just over $4,000 after beginning the slow climb back. Earlier on Saturday morning, every single one of the top 20 coins by market cap, except for stablecoins, was down double-digit percentages.

There was a busy news cycle around Bitcoin this week.

On Monday, Jack Dorsey’s announcement that he's resigning from his position as CEO of Twitter was met with a flurry of speculation that the Bitcoin-maxi CEO would focus all his efforts on crypto, possibly by refocusing his efforts on his crypto-friendly payments company Square. Indeed, just one day later, Square renamed itself Block, an apparent nod to blockchain. The stock did not respond well.

On Tuesday, both Bitcoin and the stock market suffered mild pullbacks after Federal Reserve Chairman Jerome Powell said he thinks “It’s probably a good time to retire that word [transitory]” when talking about inflation. Powell’s comments were directed specifically at the possibility of economic and employment uncertainties due to Omicron.

Bitcoin and Ethereum spot ETFs (exchange-traded funds) are regulated investment products that can be bought on public exchanges. They track the price of digital assets in real-time, enabling investors to gain exposure to crypto without taking on the risks associated with directly purchasing and holding it.

While Canada has approved several crypto spot ETFs, the United States Securities and Exchange Commission has only authorized VanEck’s Bitcoin Futures ETF so far. VanEck’s ETF tracks Bitcoin futures prices, so unlike spot-market ETFs, VanEck’s is actually tied to a bundle of contracts to buy Bitcoin in the future, making it a more inaccessible investment product for many investors.

On Thursday, the SEC rejected WisdomTree’s application for a Bitcoin spot ETF in the U.S.

How did altcoins fare?

Altcoins generally follow the price of market leader Bitcoin; virtually all of them are firmly in the red after this week except Ethereum rival Terra. Terra flipped Dogecoin and burst into the top ten with a new all-time high of $69.56 yesterday. In the last 24 hours Terra did crash 11% to around $60.93, but that’s still 39% higher than it was seven days ago.

And then there's Dogecoin. Dogecoin is down 15% overnight and 15% in the last seven days. Last week, a glitchy Dogecoin network update stopped Binance customers from being able to withdraw their DOGE. Elon Musk flew to their rescue, and got into a Twitter spat with Binance CEO Changpeng Zhao.

On Monday, Binance resumed Dogecoin withdrawals, proving that all DOGE traders needed was for their usual hero Elon Musk to step in.

Finally, Solana (SOL) is weathering the storm. Crypto’s fifth biggest coin by market cap is up 3.43% from last Saturday. On Tuesday, digital asset manager Grayscale added a Solana Trust to its suite of crypto investment products.